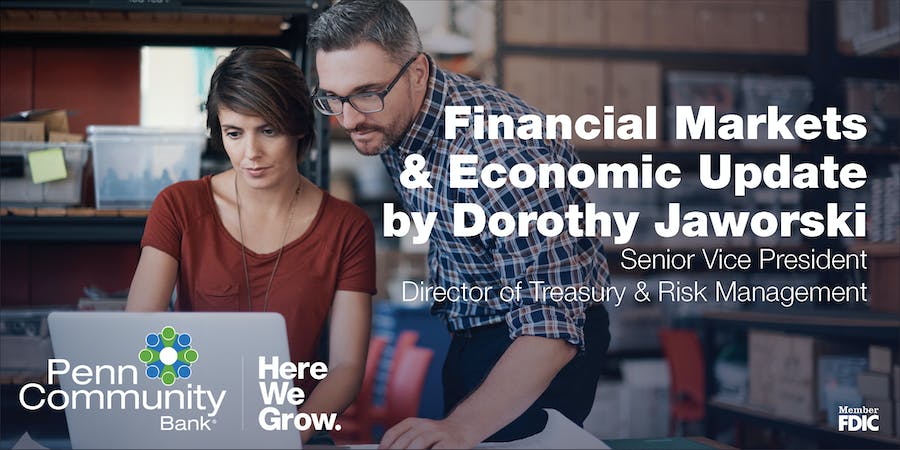 “The more things change, the more they remain the same.”  Jean-Baptiste Alphonse Karr

The past year can only be described as a rollercoaster ride during this pandemic.  Rotating lockdowns had been the norm for most of 2020 and hit again in the first quarter of this year.  And now, many countries around the world and many US states, including Pennsylvania, are removing restrictions, while others add restrictions.  Are there any bets on when the next lockdown goes into effect?  In terms of Covid-19, we see the tide turning and have reason for optimism, but it is like a cloud that hovers over our lives.  The economy did great in recovering from the lockdowns, thanks to massive stimulus, or relief, monies approved by the federal government for payments to individuals and businesses.  How can we not be optimistic when GDP rose +6.4% in the first quarter of 2021?   It may be a temporary high, but we will take it for now.

The financial markets have been worrying about inflation since the beginning of 2021.  Longer-term yields rose by .50% to .70% on five to ten year Treasuries and mortgages in a matter of months, as the obsession with inflation took center stage.  The markets saw all the stimulus, the prospects for strong growth this year, and the accommodative Fed who might be forced to tighten and reduce their bond buying, which is currently $120 billion per month.  The Fed claims raising rates is years away and bond buying will continue at least through this year.  There now seem to be two camps- runaway inflation that lasts and transitory inflation that fades.  Who wins?

The Federal Reserve learned an important lesson as they tightened policy and raised interest rates from 2016 to 2019.  They were afraid inflation was going to take off, however, it never did.  Why?   There are structural issues underlying our economy that continue to hold back growth- high debt levels, technological change, and supply chain logistics, which all kept inflation in check.  In 2020, the Fed changed their policy to raise rates to suppress inflation only when it actually appears and runs higher than their target for a long period of time and not based on projected inflation.

So, is there an inflation threat or not?  The markets seem to think the threat is there as they raise long-term rates.  They point to the recent government relief bill of $900 billion in December and another package of $1.9 trillion passed in March, not to mention last year’s $2.2 trillion.  That’s a lot of “stimulus” for an economy that is recovering on its own and a classic recipe for inflation, which is too much money chasing too few goods.

Admittedly, there are supply chain issues and lower than normal inventories.  Inventories are very low right now for semiconductor chips, steel, lumber, and cotton.  Think back to last year’s supply disruptions of meat, some food items, cleaning supplies, and toilet paper.  An event in March, 2021, may change the way companies rely on international shipping.  A large container ship bound from Asia became stuck in the Suez Canal, disrupting worldwide supplies for weeks, as 500 vessels had to wait for it to be moved or sail around Africa.  The major costs of this event  started many companies thinking about bringing production home or lining up several supply lines.  Also, consider that many supply chain troubles originated from China and Taiwan and they lost market share during the height of the pandemic in 2020.  Their goal is to reclaim that share and the way they will do it is lower prices.  We’ve also seen a stronger US dollar in 2021, so that would also make imports cheaper and keep prices lower.

Government debt has reached $28.1 trillion at the end of March, 2021 and stands at 128% of GDP.  Levels over 90% have proven to have a negative impact on GDP, by the government “crowding out” effect on the private sector (where the productivity is) with its taxes, spending, and borrowing.  One needs only to look back at the record 10 year recovery from 2010 to 2020 and wonder- why did we grow at only 2.2% on average and not our potential of 3.00% or better?  I fear that once the stimulus induced spending is over, we may begin to sink back to +2% GDP growth due to the debt overhang.  And remember, the ability of the government to continue to issue debt is not unlimited…

I think you can now tell that I am in the “inflation is transitory” camp, along with good company like the Federal Reserve and a hero I have mentioned many times, Dr. Lacy Hunt.  By the way, the Fed is projecting core inflation at +2.0% to 2.2% for the next three years.  We have excess capacity in our labor force, with the pool of available workers currently at 16.56 million and excess capacity in manufacturing, with total capacity at 74.4% in March, 2021.

I have to admit to higher inflation in two “Hs,” hiring and housing prices, as people are adjusting to the pandemic and moving from cities to suburbs, driving prices up when fewer homes are on the market.  Housing, especially new home prices, is in its own bubble; the increased costs of materials have already added $24,000 to the cost of a new home and that’s if the contractor can find employees.  This, too, shall pass.  Companies are having a hard time hiring workers, even though many are unemployed and the pool of available workers is 6 million higher than it was pre-pandemic.  Unemployment payments may be partially to blame as well as child care issues as students attend school remotely.  There may also be lingering fears of covid-19 when returning to the workplace.  The unemployment rate is 6.2% nationally and labor participation is still low at 61.5%.  The Federal Reserve will be focusing on bringing employment back to full employment, especially for all segments- race, age, lower income, etc.  Returning to full employment will take until the end of 2022 when we achieve 4.0% unemployment, according to the Fed’s March, 2021 projections.

I talked about growth a little bit earlier.  First quarter, 2021 GDP was +6.4% and this followed growth of +4.3% in the fourth quarter of 2020.  We have now returned to pre-pandemic levels of GDP; however lost jobs during the pandemic have not returned to those levels and are still close to 9 million.  The rollercoaster took GDP down by -31.4% in the second quarter of last year and it was quickly reversed by a massive gain of +33.4% in the third quarter as lockdowns ended.  There was a large amount of spending on goods the past several quarters, but services spending has lagged behind and is still below 2019 levels.

There is pent-up demand for leisure activity, travel, vacations, eating out, and going to sporting and entertainment events. Consumers have increased savings rates to 13% to 20% on average through the pandemic, proving there is money on the sidelines.  A lot of businesses suffered during the pandemic lockdowns and those costs may not be fully captured in GDP.  Vaccinations continue, with an estimated one-half of adult Americans already vaccinated with the Moderna, Pfizer, or J&J shots.  Vaccines were supposed to be the answer to complete reopening, but the goal posts keep getting moved.  Pennsylvania is removing all restrictions except mask-wearing at the end of May.  New York City announced complete reopening as of July 1st.  This should get people out and about again.

Jamie Dimon (another one of my heroes) recently revived a term from the 1990s to describe his view of the economy through 2023- “Goldilocks-“ not too hot, not too cold.  We will work out the supply chain issues and perhaps create jobs as we bring manufacturing home.  I do believe that after we get through the next several quarters of higher growth from stimulus and pent-up demand, we will see growth revert back to its equilibrium level around 2.00% next year, mainly due to high debt levels weighing on growth.  That would end inflation fears and keep the Federal Reserve on hold, keeping short-term rates near zero, until we reach full employment and inflation averages above 2.00% for an extended period of time.  Speaking of the Fed, their projections from March, 2021 have GDP growing at +6.5% in 2021, +3.3% in 2022, and +2.2% in 2023.  Starting next year, Goldilocks indeed.

There has been plenty of talk in Washington about raising corporate taxes to 28% and raising taxes on higher income individuals’ capital gains.  Higher taxes are on the table at the state and federal level.  Higher taxes will hurt economic growth, especially at the corporate level as jobs are cut, wages stay flat, and investments lag.  Taxes have the same impact as government borrowing, which is a negative impact on growth.  Weakening growth is not a recipe for high inflation.

After a year of lockdowns, my family and I ventured out and traveled to Disney World in Florida in April.  The airports were crowded but the parks at Disney were at about one-half capacity.  We got on many more rides than usual and did so in beautiful weather most of the week.  This was our own version of releasing pent-up demand and having a great time relaxing and having fun.  France is calling, but that trip will have to wait a while.  I hope that everyone begins to release their own pent-up demand and get out again in the world- at least the world we can still travel to right now.  Enjoy!