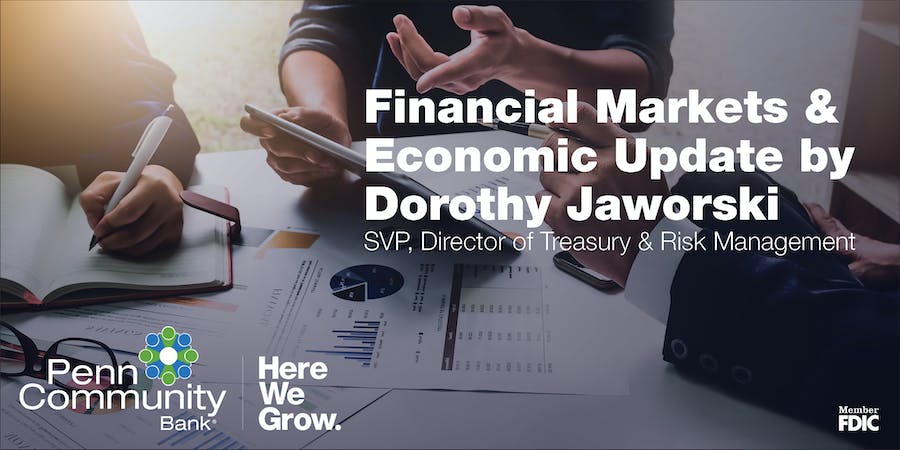 I hope that everyone had a great Thanksgiving. We have much to be thankful for- our families, our friends, our co-workers, and our beloved country. Our economy is giving us fits right now with supply chain issues, major labor shortages, raw material shortages, and dreaded price increases on just about everything. Inflation has awakened. We still have lots of uncertainty surrounding the pandemic and travel but we are managing to persevere through it.

By now, everyone has heard that the economy has some big “supply chain issues.” We now hear it on TV and on the radio and read about it in newspapers and articles online. What exactly happened? As the
economy reopened quickly earlier this year, manufacturers and distributors were not fully prepared for the surge in demand from consumers and businesses. Government stimulus money had flowed freely for over a year and demand for products- most notably durables like autos and appliances- spiked. And the flow of products slumped.

Many factors contributed to the slowdown and, in some cases, failure, of the supply chain. The manufacture of electronics, semiconductor chips, medicines, and medical supplies in China and Taiwan was down due to bad weather, electricity shortages, and Covid-19 lockdowns, so the amount of production was lower. US manufacturing capacity was not able to pick up the slack. Maybe we outsourced a little too much?

For products that were shipped, mainly in shipping containers on cargo ships, there were severe bottlenecks at the main US ports in Los Angeles and Long Beach, California and in Savannah, Georgia, with dozens of ships lined up off the coasts waiting to offload goods. But where are the workers to unload the ships? Where are the truckers to drive the goods to distribution centers and retail destinations? I’ve read that we are short 80,000 truckers across the US. The five to six week backlogs to unload containers from ships has led to shortages of chips, medicine, plastics, glass bottles, some food products, and raw materials.

Anyone who has purchased anything recently, which is all of us, has experienced the evil of inflation, which is the by-product of the demand supply imbalance. Anyone who has tried to buy a new or used car knows this inflation. And we all know how much more Thanksgiving dinner cost this year.

No one knows how quickly the supply chain issues will resolve. But as the Wall Street Journal printed last week, shortages can quickly turn into gluts, as evidenced by lumber. The high prices caused by the shortages tend to attract new investment in production. Prices then would decline as supply increases and bottlenecks ease. At least one major company, Walmart, is betting on this.

I called inflation “evil” earlier, and it is. Inflation is like a tax. The more we spend, the more it hurts to pay that tax. And we are experiencing what our economics textbooks taught us- inflation results from too much demand chasing too few goods. The consumer price index is running at +6.2% year-over-year and core PCE, a Federal Reserve favorite, was +4.5% in the third quarter.

The massive government stimulus is primarily behind the excess demand. Since March, 2020, thousands of dollars of payments have gone to individuals and PPP loans were made to businesses. This led to a much higher savings rate for some but an increased desire to spend for others. The Federal Reserve also poured trillions of dollars into the financial markets during the pandemic. They increased money supply but the huge drop in the velocity of money held much of that money out of the real economy. They have just begun the process of cutting back, or “tapering” their purchases by $15 billion of the $120 billion monthly bond purchase program. Further cuts are expected each upcoming month until the program gets to zero by mid-2022, at which time they may consider whether to raise interest rates. If they were to try to raise rates today to fight inflation, GDP growth would suffer, demand would decline, and supply chain issues would not be resolved. Most economists see the Fed tightening by a small amount, but not until the fourth quarter of 2022.

Energy prices have spiked from the same supply shortages, including shortages of oil and natural gas in the US and European Union by approaches to climate change, hurting energy production and output. We
feel it in gasoline and heating oil and natural gas price increases, which have continued through all of 2021. Consumers may reach a “tipping point” as these prices get too high and cut back on other spending.

Originally, the Fed was calling inflation “transitory,” but we know it is lasting longer than expected and is very real. Inflationary expectations, as evidenced in the Treasury bond market, are 3.03% for five years and
2.61% for ten years, compared to expectations and reality under 2.00% for the past ten or more years. But this is hardly the runaway double digit inflation of the 1970s, but it will be elevated until the supply chain issues can be solved.

Where have all the workers gone? People are resigning and quitting jobs in droves. The quit rate in September was 3.0%, or 4.4 million people quitting their jobs, and is the highest in 20 years. There are 3 million more available job openings than there are unemployed workers. Retirees are not included in the quit rate and are tracked separately, adding to the worker shortages. We have seen all of the help wanted signs at nearly all businesses, so I wonder where are all the job applicants?

Do people want real change? Are they quitting stressful jobs where they feel under appreciated? Are workers facing burnout, which is most obvious in health care? It does not seem that people are quitting jobs to go back to school; Pennsylvania university enrollment is down to 89,000 this year, which is the lowest in decades. Many people want a work-life balance and more meaning in their lives. Many workers want to continue working-from-home while their managers want them to come into the office. Perhaps there are still child care issues and continued Covid-19 fears. There may be an impact in lost jobs from companies who are enforcing vaccine mandates, exacerbating the worker shortages.

Workers want bigger paychecks, but even higher wage offers from employers are not attracting new employees. Wages are rising, now up +4.9% year-over-year, and may begin to contribute to higher inflation. The unemployment rate is down to 4.8% in October, which sounds great, but the labor force participation rate is 61.6%, close to a 30 year low. The labor force is 3 million less today than it was in early 2020 and the pool of available workers is 3 million higher than early 2020, which should show
we have available talent.

GDP and the Consumer

The consumer makes up two-thirds of the economy. They spent freely in the first two quarters of 2021, driving GDP growth to exceed 6.0% annualized, but pulled back in the third quarter to +2.1%; without inventory changes, growth would have been -.1%. Consumer confidence has fallen 25 points so far this year, hurt no doubt by supply chain issues and inflation.

The fourth quarter is seeing a nominal pickup in retail sales, of +1.7% in October; excluding inflation, the change was really +.1%. Perhaps included was some early Christmas shopping and stockpiling of goods.
Inflation may end up depleting the savings most consumers with mortgages realized last year from refinancing at lower rates.

Housing remains strong, with huge year-over-year increases of +18.0% to 19.7% recently. Most economists expect the pace of price increases to decline, but still remain positive as existing home inventories may not be as tight as they are now. A demographic factor also supports ongoing housing price increases. The 2020 census showed 12.3 million new households formed in the past ten years, but only 7 million new single family homes built, showing a shortage of desired homes.

The Philadelphia banking community lost an icon during November. We also lost our good friend, Dolores Lare, who worked at several financial institutions in her long career, as an IT and core systems expert and
manager of all operations of a bank. We had the good fortune to be able to work with her. She was kind, caring, fun-loving, and very giving of her time and of herself to family, friends, colleagues, and to charitable endeavors. I am blessed to have had Dolores as a friend. We may not see the likes of her again.