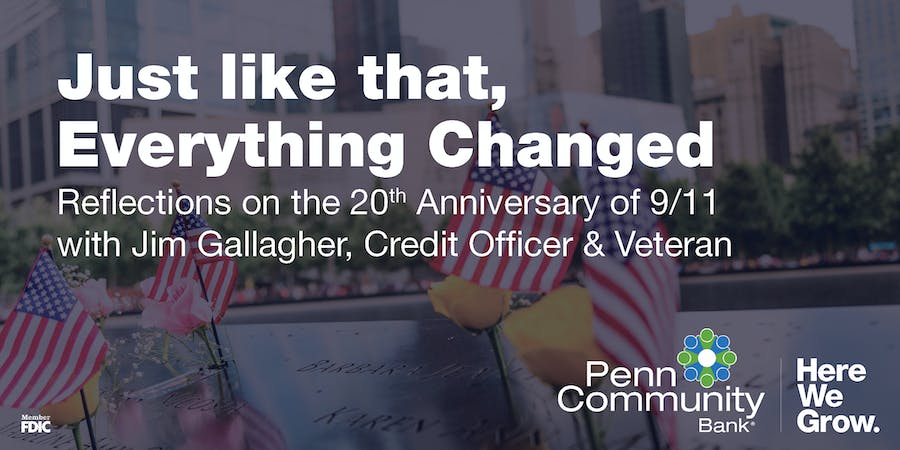 Twenty years after the terrorist attacks of September 11, 2001, Penn Community Bank Credit Officer Jim Gallagher still recalls the shock and anger he felt, and immediate impact on his world.

As a member of Air National Guard assigned to the 111th Fighter Wing out of Naval Air Station Joint Reserve Base Willow Grove, Jim immediately got on the phone to his

commander to see how he could help. Within a couple of weeks, he was assisting the command post as it managed several A-10 Warthog jets deployed to Southwest Asia in the immediate aftermath of the attacks.

As a guardsman, Jim was a military member and civilian banker, and remembers the unique situation of pulling double duty in an uncertain time.

“I pulled some long hours. I was lucky to have very understanding bosses – both Vietnam veterans – and they provided my with some flexibility. I would go to the office for a normal day of work then head immediately to the base until around 11PM…I did that for several months, including a deployment to Prince Sultan Air Base in Saudi Arabia mixed in,” he said.

Having served as a member of the Air Force since 1986 – first with the 42nd Bomb Wing, then the 509th Bomb Wing – before joining the Pennsylvania Army National Guard in 1993 as part of the 1st/213th Air Defense Artillery Battalion, Jim spent the better part of the 15 years leading up to 9/11 as part of the Cold War era military. Yet, with the attacks, the page turned and so did the threats. “We had a different type of enemy and a different type of warfare on our hands.”

As the response to 9/11 and the Global War on Terror grew – first with expanded efforts in Afghanistan, then with the US invasion of Iraq in 2003 – so did Jim’s role. At that time, he was called to active duty for 11 months in support of the 111th Fighter Wing’s mission.

“Many of the active members were deployed and I backed filled their positions at the base,” he said. “As a member of the Comptroller Flight, most of my duties could be done at Willow Grove, utilizing technology that made it simple to communicate and work with our deployed teams. Except for a brief period, I remained on base and got to return home regularly.”

It’s at that time that things changed for National Guard units, Jim says. What were typically thought of a “citizen soldiers” quickly became prominent pieces of the US’s military equation.

“National Guard members were regularly being deployed with active duty units in support of the war. It was no longer the ‘one weekend a month and two weeks a year Guard’ only helping with natural disaster. It became a more critical and necessary component of the military.”

As with many, the call to serve placed greater stress on members and families. “I  found myself doing my best to strike a balance between my banking career and my military career,” he said.

Eventually, Jim retired from the military in 2017 – over 30 years after originally enlisting. Even with his formal service concluded, he still finds time to be active in his community and is a leader at Penn Community Bank – still driven by the sense of duty that drove him throughout his long military career. “Whatever the field, veterans bring loyalty, commitment, and a team concept with them,” he says.