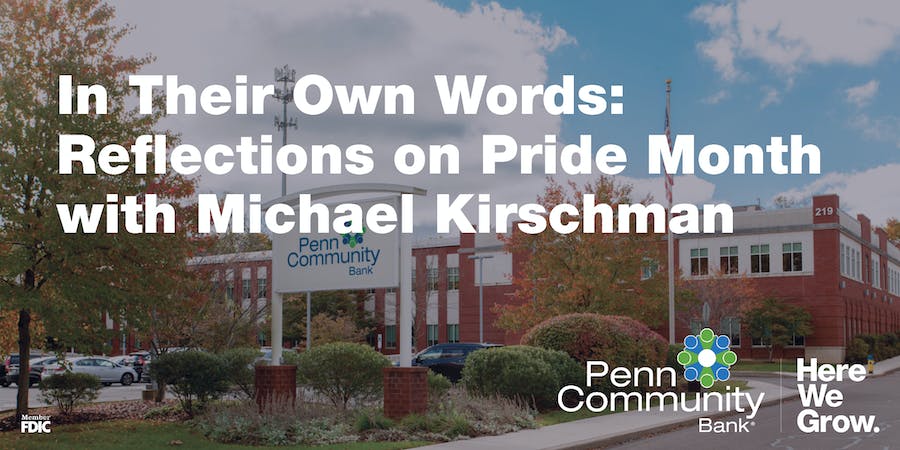 In his role as branch operations specialist, Michael Kirschman supports Penn Community Bank’s team members throughout the bank as a resource for answers about branch procedures and policies. He’s also increasingly involved with the bank’s Inclusion, Diversity and Equity for All (I.D.E.A.) Council, which works to foster a more inclusive workplace.

While Penn Community has developed inclusivity as an integral part of its culture, Michael says the banking industry overall has a long way to go.

“With respect to my experience as an LGBTQ+ professional, the industry and the bank are two different worlds,” Michael said. “At Penn Community, within the first six months of my joining the bank, I brought my boyfriend at the time to the bank’s winter gala, and I was in awe at how it was not an issue. It was a safe space for me to express myself and grow to my full potential within Penn Community Bank.”

Outside the organization, however, it has been a different story. “It can be a challenge when you’re trying to build rapport and build a network, especially when the conversation leads outside of banking,” said Michael. “Questions usually come up about whether I am married or have a girlfriend. Until recently, my answer was just simply ‘no,’ and I would change the subject. In some cases, folks don’t bat an eye when opening up about being gay, but there are other times where the rapport-building abruptly stops and there is no more interest in that conversation. Something that I have noticed in the industry is the assumption that you’re straight until you say otherwise. It has lead me to realize that coming out was not a one-time occurrence.”

As the banking and finance industry moves forward on the issue of diversity, Michael envisions a future in which LGBTQ+ professionals hold more visible leadership roles.

“I would like to see LGBTQ+ colleagues who are in a position of power to represent the LGBTQ+ community within the industry, and I think we are getting there,” he said. “Things like that don’t happen overnight, but it gives other individuals something to strive toward and a glimpse of hope that they, too, can make it there. It’s encouraging to think that my LGBTQ+ identity will not be a hurdle here at Penn Community Bank – allowing me to grow personally and professionally. I am hopeful that one day I am in a positon where other LGBTQ+ team members sit back and think, ‘that could be me one day.’”

What does LGBTQ+ Pride month mean to you?

To me, LGBTQ+ Pride month really represents awareness about creating equality for everyone and creating a safe space to be authentic. I also take this month to recognize the many LGBTQ+ people that have paved the way. Without those individuals – and the many allies that accompanied them – we would not be where we are today. Individually, Pride month allows me to be an advocate for other generations that follow and make sure that they have more support than previous generations.

What attracted you to a career in banking, and what drew you to Penn Community Bank?

When growing up, banking was not the industry where I thought I would start my career. But a friend who works at Penn Community Bank reached out to me about an opening. I started at the Dublin branch as a bank teller and have worked my way up through the company over the past nearly eight years.

Have you had a mentor during your career? If so, how has that factored into your professional development?

Within Penn Community Bank I’ve had many mentors, but one that really stands out is Sandy Ziegler who was my boss when I was in the training department and has been my mentor right from the start. I always felt as though I could lean on her for advice regarding both my career and my personal life. Even today, Sandy is somebody whom I talk to regularly, especially as we both sit on Penn Community’s I.D.E.A. Council. Sandy is somebody to whom I can express concerns without a filter and whose feedback continues to shape the direction in which I’m going. In addition, she has been an ally to the LGBTQ+ community and has shown her support without pause.

Is there a particular book that has left a strong impression on you in your professional career?

Yes, the book What If by Steve L. Robbins has shaped my perspective about how to recognize different scenarios into which diversity and inclusion come into play. The author writes about his life experiences and looks back through the lens of diversity and inclusion to shed light on how he may have approached things differently, given his naivety at the time. It has taught me to stop in the moment and realize what’s happening in front of me. It’s great to look back and reflect upon your interactions, but it’s even better when you can realize it’s happening right in front of you, and I really think this book helps you to be more proactive in your daily interactions.