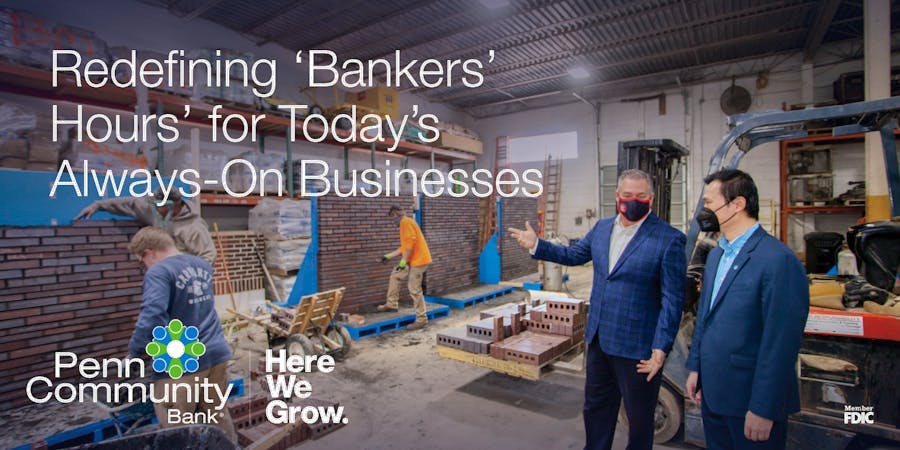 Philadelphia-area contractor D.M. Sabia & Co., Inc. prides itself on providing high quality masonry work that will stand the test of time. Since the business’ founding in 1923, the Sabia family and their crews have been responsible for some of the region’s most notable masonry projects, including the wall of Chelmsford granite that undulates throughout the Liberty Bell Center, the glazed brick, granite and cast stone of SEPTA’s 63rd Street Station, and the bluestone paving, granite cannon plinth and cannons that welcome visitors outside the Museum of the American Revolution.

Over its nearly 100 years in business, the family-run firm has survived hard times, from the Great Depression of the 1930s to the Great Recession of the early 2000s. So when the COVID-19 pandemic hit Pennsylvania in March 2020, third-generation owner Nick Sabia knew the company was going to need some help if it was going to survive this crisis, too.

In just a period of months, $6 million in contracts – a prison in South Jersey, a luxury home in Center City, a major transportation job – were either cancelled outright or put on hold. Even more worrisome, payments on accounts receivable slowed considerably, as Sabia’s customers held on to their money longer. When the Paycheck Protection Program (PPP) was announced, Nick knew he needed it and he knew his Relationship Manager, James Li, and the rest of the team at Penn Community Bank were the ones to go to.

“The bank walked us through the PPP process. Once they had the information, the loan was turned around very quickly, and we had the money within a day or two,” Nick said. “Without PPP, we would have gone over our line of credit, because so many people were not paying us in a timely fashion. Even with a huge amount of PPP, we literally were still borrowing almost the entire year. So that tells you how bad it would have been had we not had PPP.”

The ability to take advantage of the PPP program and lean on Penn Community Bank’s personalized assistance when business was down actually dates back a relationship built when too much business was impacting Sabia’s finances.

In 2014, D.M. Sabia won the contracts for the two largest jobs the company had undertaken. The catch: the customers wanted crews to work seven days a week to get the job done as quickly as possible.

“You can imagine what that does to your payroll, with five regular days of pay, one day at time-and-a-half and another day at double time. That’s a lot of payroll,” Nick said. “On a job like that, by the time they give you the change order so you can bill for the work, and then by the time they actually pay for the extra work, it could take three months.”

With jobs running seven days a week, Nick could see that the company was going to need an increase in its line of credit, so he could pay his workers and keep the project moving even if the customer was slow to pay. But the large regional bank he was with at the time refused to expand the company’s line of credit. So he picked up the phone and called someone he knew at Penn Community Bank.

“I explained the situation to James and I told him the same things I had told the other bank. He got back to us immediately and his team jumped right in to get everything done. Within two weeks, we had an approved $3.5 million line of credit and we had moved all of our banking over to Penn Community Bank. James worked over time, double time, whatever it took to make the deal happen,” said Nick.  “Since then, James has been instrumental in pretty much any day-to-day issue we may have. No matter what the situation, no matter what time is it, if I call him, he either picks up the phone or he returns the call quickly. He really facilitates everything we do.”

“Today’s businesses don’t just operate 9 to 5, Monday through Friday. Business leaders, like Nick, need bankers and lenders who understand that and are willing to return phone calls, texts and emails even after hours,” said James. “When we meet with businesses like D.M. Sabia we see so much potential and really want to start relationship that helps them grow and thrive.”

Nick drew upon that relationship again when D.M. Sabia was awarded the contract to build The Commons at Villanova University, six new residence halls of apartments and suites designed to foster a sense of community, with a TechZone, convenience store, fitness centers, restaurant and outdoor gathering spaces. The $28 million contract raised the bar again as the largest job D.M. Sabia had undertaken. Once again, it would require a large investment in ongoing payroll. Nick again turned to the lenders at Penn Community Bank.

“I went to James and said, ‘We’ve got this big job coming up. We’ve run some projections and I think we need our line to be increased to $7 million, just in case,’” Nick said. “In the end, the job went well, and we didn’t have any really delayed payments, so we didn’t need to draw on that increase, but it was good to know that we had it if we needed it.”

For its work on The Commons at Villanova University, D.M. Sabia won “Best Specialty Contractor Project” in November 2020, part of the Annual Construction Excellence Awards sponsored by the General Building Contractors Association.

“Penn Community has been there for us every time we’ve needed them,” said Nick. “When they make a commitment to us, they honor it. As a contractor, I can’t tell you how much that means to me.”