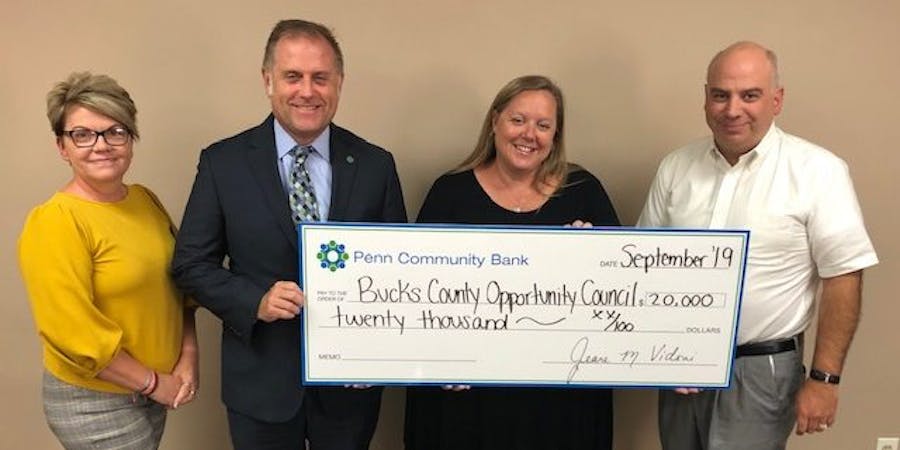 The funds will help support the organization’s Economic Self-Sufficiency Program, which offers participants the education, job training, life skills, and coaching that they need to break the cycle of poverty.

END_OF_DOCUMENT_TOKEN_TO_BE_REPLACED

K. Bernard Tynes recognized as one of 10 people under 40 to watch by nation’s leading African-American newspaper

DOYLESTOWN, Pa. (September 30, 2019) – Penn Community Bank is proud to announce that K. Bernard Tynes, Director of Marketing Strategy & Data Analytics, has been named among Philadelphia’s Most Influential African Americans by The Philadelphia Tribune.

Tynes was recognized as one of 10 African Americans under the age of 40 to watch by the Tribune. He was honored at the Tribune’s annual awards ceremony and event on Sept. 19 at the Philadelphia Convention Center.

END_OF_DOCUMENT_TOKEN_TO_BE_REPLACED

Local, independent bank celebrates opening of new branch location in Doylestown by supporting one of the region’s largest arts festivals

DOYLESTOWN, Pa. (September 16, 2019) – Penn Community Bank was proud to serve as a festival-level sponsor of the 2019 Doylestown Arts Festival, one of the largest and most-celebrated arts festivals in the Bucks and Montgomery county area.

END_OF_DOCUMENT_TOKEN_TO_BE_REPLACED

Held on July 22, the event featured an afternoon of golf at Doylestown Country Club followed by auctions, awards, and dinner. Proceeds from the event benefit the Ann Silverman Community Health Clinic. Located inside Doylestown Hospital, the clinic is staffed by volunteer doctors, dentists, and nurses and offers free medical care and dental care for uninsured families across Bucks County.