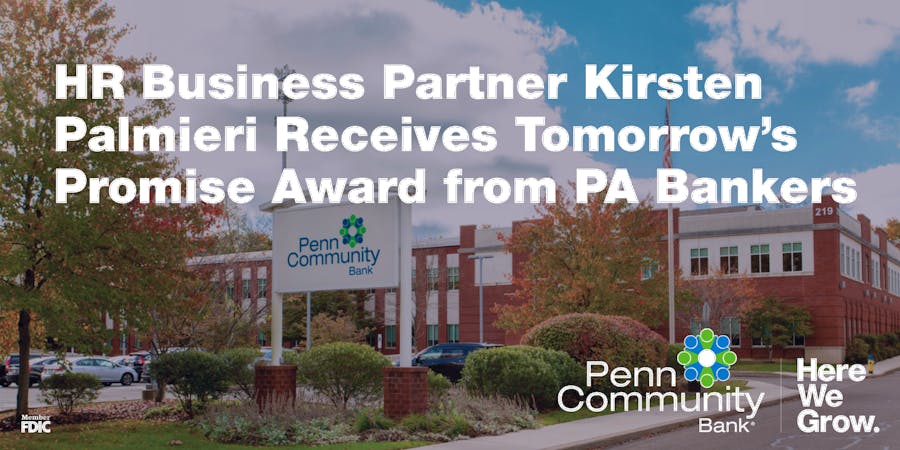 The award celebrates a woman aged 35 or younger who continues to make a significant impact in her field and community, making her “one to watch” in Pennsylvania’s banking industry. Recipients of the award are involved in their community, have a team mindset, welcome change and opportunities to take on new projects, and continue to shape their organization. It is presented as part of PA Bankers’ Women in Banking Recognition of Excellence Program, which is dedicated to honoring men and women in the banking industry who promote and inspire women in the workplace to reach their full potential.

“Since starting as an intern, Kirsten has worked her way through the organization and serves as a valued leader and a dedicated part of our team,” said Georgann Berger McKenna, Penn Community Bank Chief Human Resources Officer. “Penn Community Bank joins Kirsten in celebrating this well-deserved recognition.”

END_OF_DOCUMENT_TOKEN_TO_BE_REPLACED 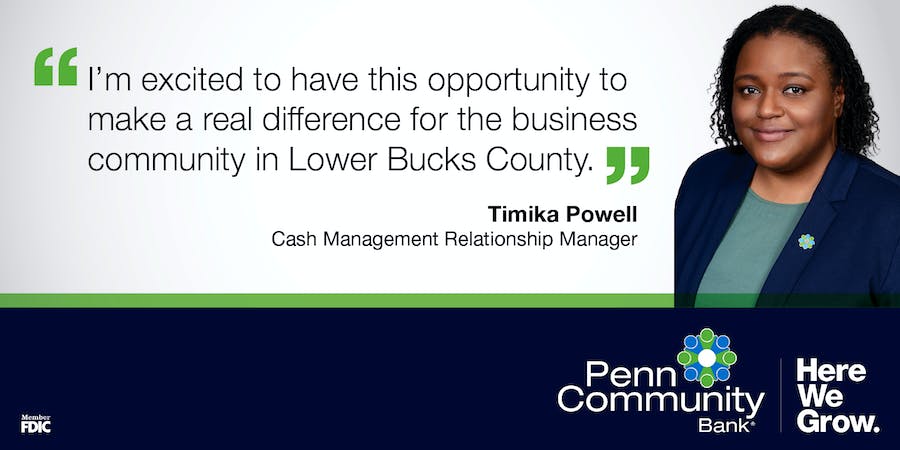 Penn Community Bank team member Timika Powell continues to grow her relationship — and strengthen the bank’s longstanding ties — with the Lower Bucks County Chamber of Commerce, after being appointed to serve a three-year term as a member of the Lower Bucks Chamber’s Board of Directors.

A Cash Management Relationship Manager at Penn Community Bank, Timika began participating in the Chamber’s leadership program, Leadership Bucks County, in 2019. She quickly developed relationships and volunteered to serve on numerous committees and in support of events. Building on those connections, the Chamber invited her to be a mentor and serve in an advisory role for the newest leadership class. Timika took over Penn Community Bank’s seat on the Chamber’s board during the summer of 2021.

“I’m excited to have this opportunity to make a real difference for the business community in Lower Bucks County,” said Timika. “In addition to my work on the board, my biggest focus with the Chamber is working to revamp the leadership program, which will remain on hiatus this year while we invest time in developing an exciting, robust new program in 2022.”

END_OF_DOCUMENT_TOKEN_TO_BE_REPLACED 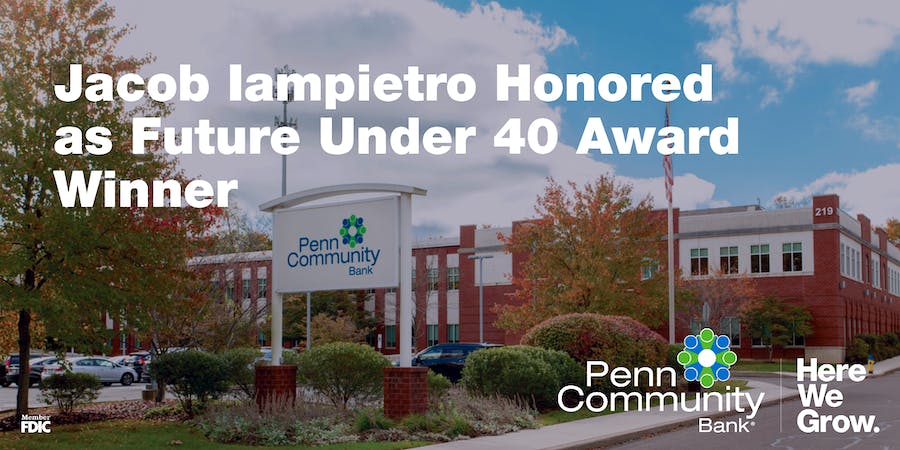 PERKASIE, Pa. (September 2021) – Penn Community Bank, the largest mutual bank in eastern Pennsylvania, is pleased to announce Jacob Iampietro, Senior Vice President and Director of Retail Banking, has been announced as a winner of the Pennsylvania Bankers Association’s (PA Bankers’) inaugural Future Under 40 Awards. The awards recognize banking ten industry leaders, aged 40 and younger, who have made a tremendous impact in their institution, the community and the industry.

“Penn Community Bank joins Jake in celebrating this well-deserved recognition,” said Stephen Murphy, Penn Community Bank Chief Banking Officer. “Throughout his time with the bank he has served as a leader and a mentor, working tirelessly to help our customers and communities thrive.”

END_OF_DOCUMENT_TOKEN_TO_BE_REPLACED 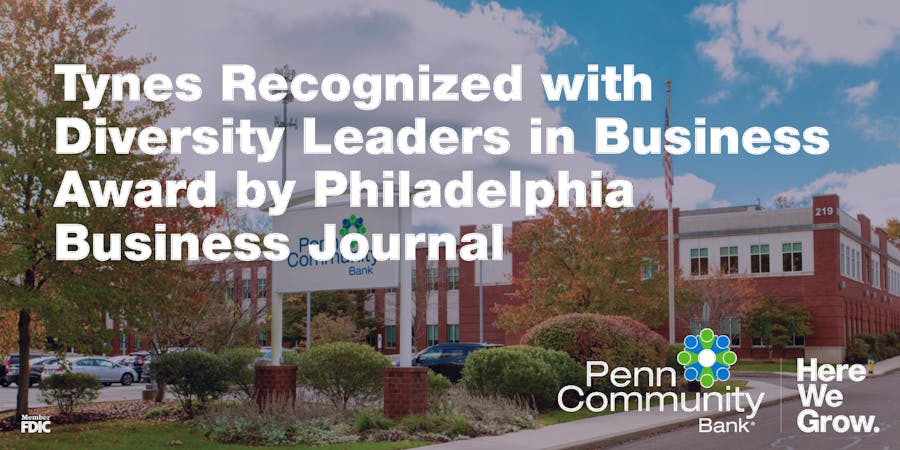 PERKASIE, Pa. (August 2021) – Penn Community Bank, the largest mutual bank in eastern Pennsylvania, is pleased to announce Bernard Tynes, Senior Vice President and Director of Marketing and Data Analytics, has been recognized  as a top diverse business leader in the region by the Philadelphia Business Journal.

“Diversity, equity and inclusion – from race and ethnicity to gender identity and sexuality – have become top of mind for businesses across the country over the last year. In an already diverse region, Greater Philadelphia companies have a wealth of talent from different backgrounds who are making an impact on the region and its business community through their leadership,” said Lisa Dukart, Associate Editor of the Philadelphia Business Journal. “Celebrating that breadth of diversity, the Philadelphia Business Journal is proud to honor 25 diverse business leaders who have demonstrated success in their respective fields and made significant contributions through philanthropic endeavors.”

END_OF_DOCUMENT_TOKEN_TO_BE_REPLACED 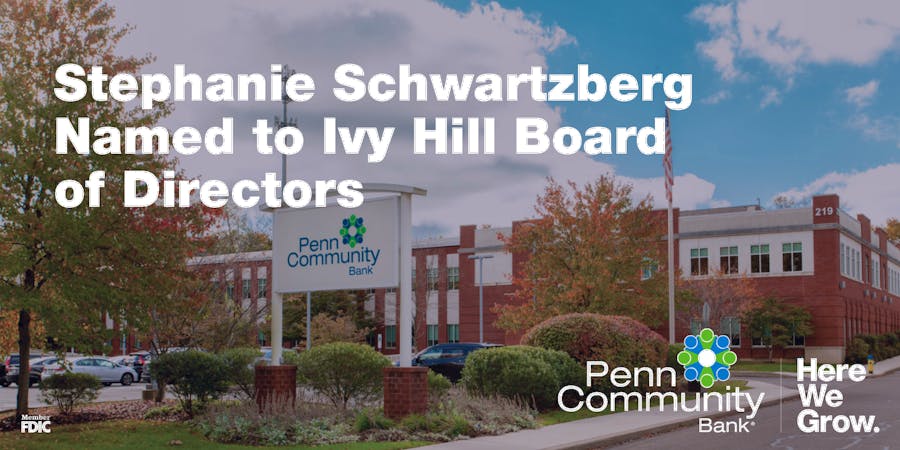 PERKASIE, Pa. (August 2021) – Penn Community Bank, the largest mutual bank in eastern Pennsylvania, is pleased to announce the appointment of Stephanie Schwartzberg to the board of directors of Ivy Hill Therapeutic Equestrian Center. In the new role, Schwartzberg will provide governance and aid in development opportunities over a two-year term.

“Stephanie has been volunteering her time at Ivy Hill Therapeutic Equestrian Center since the fall of 2020. In our hour of greatest need, she stepped up and worked with our most vulnerable population,” said Laura Brockett-Strausser, Executive Director of Ivy Hill. “Her service above self, is commendable and Ivy Hill is very lucky to have gained such a dynamic ally.”

END_OF_DOCUMENT_TOKEN_TO_BE_REPLACED 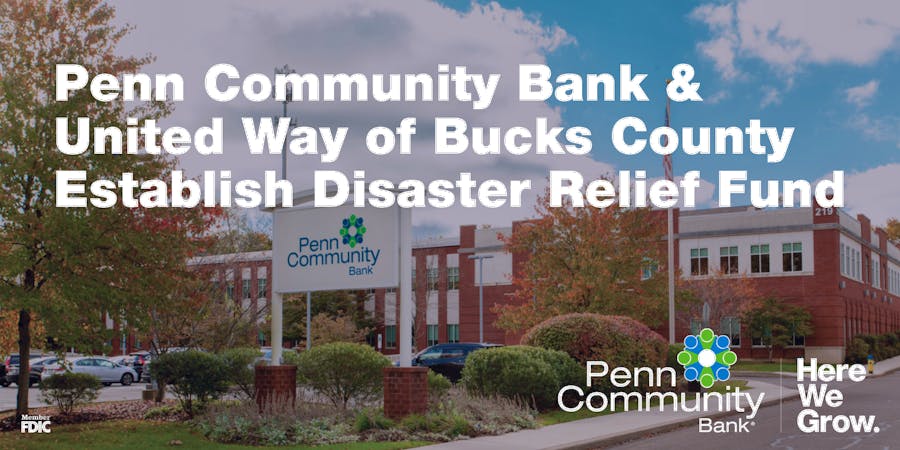 “As a community-first organization, we’re committed to serving our region – including those most in need,” said Jeane M. Vidoni, Penn Community Bank President and CEO. “Penn Community Bank is proud to once again partner with United Way of Bucks County and pledge our support to the Disaster Relief Fund.”