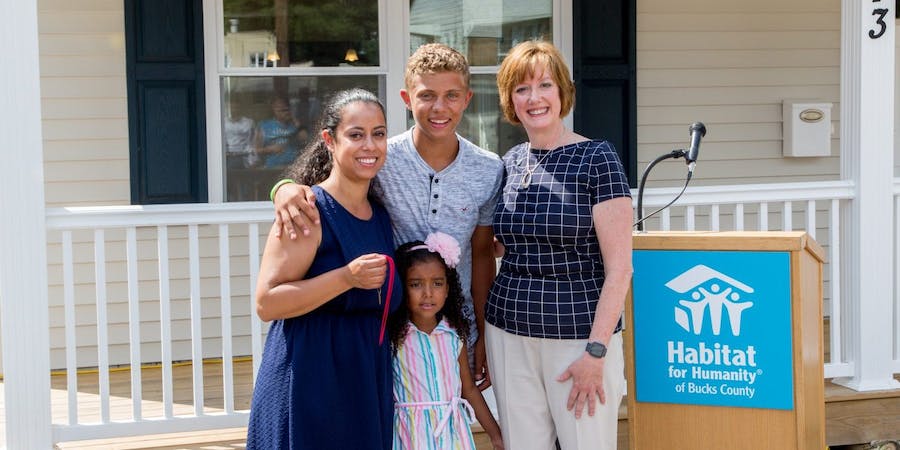 MORRISVILLE, Pa. (July 14, 2019): Penn Community Bank executives joined Habitat for Humanity of Bucks County on June 29 to celebrate the dedication of a new home for a family in Morrisville Borough.

Volunteers, neighbors, donors and distinguished guests gathered to hand over the keys to 213 Woodland Ave., Morrisville. It is the 116th home built by Habitat for Humanity of Bucks County, and is one of four new single-family homes on adjacent lots in Morrisville in a development that has been named Woodland Park.

Penn Community Bank served as the Whole House Partner on the project, pledging to donate $100,000 over three years to help finance construction of the house. More than 40 Penn Community Bank team members, executives and directors volunteered their time on site to help build the house, which will now become a home for Evita and her two children.

“Every family deserves a safe, secure place to call home, and we were thrilled to be able to help make this home a reality,” said Penn Community Bank President and CEO Jeane M. Vidoni. “Supporting affordable home ownership is a high priority for all of us at Penn Community Bank. We wish Evita and her family many years of happy memories in their new home.”

Before beginning to work with Habitat for Humanity of Bucks County, Evita and her two children were living doubled-up with family. High rent prices had prevented her from living independently, and she believed that those same high living costs put homeownership out of the question for her. Then, she found Habitat Bucks.

Founded in 1990, Habitat Bucks has built or renovated more than 100 affordable homes across Bucks County, which consistently ranks as one of the most expensive counties to live in in Pennsylvania. Habitat Bucks’ Homeownership Program provides the opportunity for low-income families to build strength, stability and self-reliance as they work toward owning their own home. To qualify, families must invest at least 200 “sweat equity” hours in the building project, have a stable income and credit history, and be able to afford the projected monthly mortgage payments while earning an average of 60 percent to 80 percent of Bucks County’s median family income, which Habitat pegs at $90,100 for 2019.

“Welcoming a family into their new home is the culmination of many hours of sweat equity,” said Florence Kawoczka, Executive Director, Habitat Bucks. “We congratulate Evita and her family and celebrate their achievement of the dream of homeownership.”

Individual volunteers along with those from local businesses, organizations, faith groups, and schools contributed more than 800 hours working along with Habitat Bucks and the family to build this home. To learn more about opportunities to get involved, visit https://www.habitatbucks.org/

Founded in 1990, Habitat for Humanity of Bucks County’s mission is Building Communities, Empowering Families. Since then, it has built or fully renovated 116 homes that are affordable in Bucks County through its Homeownership Program, which provides an opportunity for low-income families to build strength, stability and self-reliance by partnering with Habitat. Its low-cost Home Repair program makes interior and exterior repairs, including critical repairs, to help individuals improve accessibility and safety in their own homes. Revenue from Habitat Bucks ReStores provides a source of sustainable funding for the construction and repair of homes. Habitat Bucks has an open-door policy: All who believe that everyone deserves a decent, affordable place to live are welcome to volunteer to lend a helping hand. For more information, call 215.822.2812 or visit habitatbucks.org.

About Penn Community: Penn Community Bank holds more than $2 billion in assets, employs more than 325 people, and offers banking, lending, insurance and investments at 25 bank branches and two administrative centers throughout Bucks and Montgomery counties, Pennsylvania. As an independent, mutual financial institution, Penn Community Bank is not publicly traded and operates with its long-term mission in mind: to help businesses grow and prosper, to provide financial resources to individuals and families throughout their lifetimes, to strengthen the local economy, and to partner with local organizations to act as a catalyst for positive growth in every market it serves.