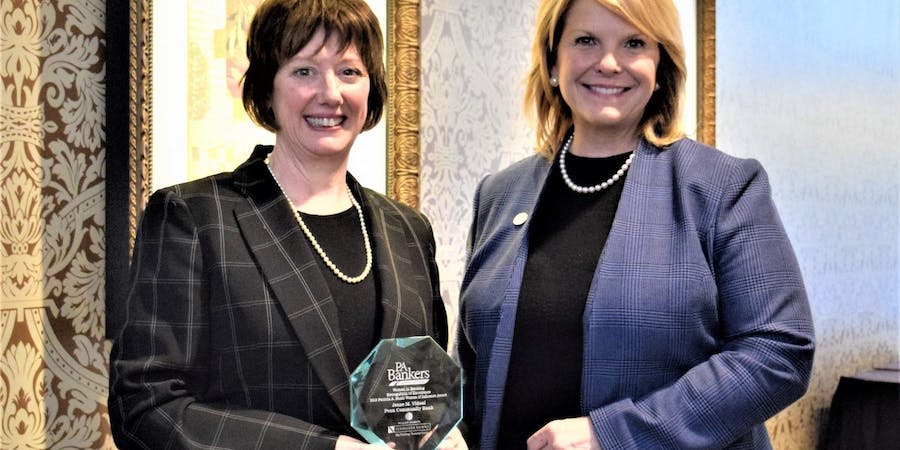 Penn Community Bank president and CEO recognized for leadership, courage, skill, and passion for advancing the financial profession in Pennsylvania

DOYLESTOWN, Pa. (March 11, 2019) – Penn Community Bank, the region’s leading independent, mutual bank, is proud to announce that President and CEO Jeane M. Vidoni has been honored with the Patricia A. Husic Woman of Influence award by PA Bankers Association.

Vidoni was presented with the award at the association’s 2019 Women in Banking Conference, held on March 4 in Hershey, Pennsylvania. The award is named in honor of longtime Pennsylvania banker Patricia Husic, who served as chair of PA Bankers Association in 2013 and founded the association’s Women in Banking program. The recipient demonstrates undeniable enthusiasm for the industry, her institution and the community in which she lives and works.

“Patricia Husic was a visionary and a trailblazer who helped to recognize and elevate the significant role that women bankers play in our profession,” said Vidoni. “I am honored and humbled to accept the award that bears her name, and hope to continue her legacy of leadership, courage and skill throughout my own career.”

The award is one of three given out annually as part of the Women in Banking Recognition of Excellence Program. The other two are the Champion for Women Award, recognizing a seasoned banking professional who advocates for women in the financial industry, and the Tomorrow’s Promise Award, which recognizes an up-and-coming young leader in the profession. The awards are presented during the Women in Banking annual conference, which brings together banking professionals from across the state for a special event featuring networking, recognition and professional development designed to strengthen and deepen participants’ involvement in the industry, the association, and their communities.

Throughout more than 35 years in banking, Vidoni has served in various roles at local, regional and national banks throughout the Philadelphia region. Today, as President and CEO of Penn Community Bank, Pennsylvania’s second-largest mutual bank, her primary mission is to ensure that the Philadelphia region has the option to do business with a locally based, independently run financial organization.

Vidoni serves on the board of directors of PA Bankers Association, representing the greater Philadelphia region and Berks, Lehigh, Northampton and Schuylkill counties. She also serves on the Community Depository Institutions Advisory Council (CDIAC) of the Federal Reserve Bank of Philadelphia, and as the Pennsylvania Member Director for the Federal Home Loan Bank of Pittsburgh. Over the course of her career, she has been honored with many awards, most recently as a 2018 Influencer of Finance by Philadelphia Media Network.

About Penn Community: Penn Community Bank holds $2 billion in assets, employs more than 300 people, and offers banking, lending, insurance and investments at 25 bank branches and two administrative centers throughout Bucks County and Montgomery County, Pennsylvania. As an independent, mutual financial institution, Penn Community Bank is not publicly traded and operates with its long-term mission in mind: to help businesses grow and prosper, to provide financial resources to individuals and families throughout their lifetimes, to strengthen the local economy, and to partner with local organizations to act as a catalyst for positive growth in every market it serves.

About PA Bankers Association: PA Bankers has been bringing banks and bankers together for than 120 years to learn, grow, serve, and engage with their peers, communities, and lawmakers. The association has built a strong reputation as a leading advocate for pro-banking policies at the state and federal levels, as well as the delivery of quality education, products, and services for banks of all sizes and their employees. Follow the Pennsylvania Bankers Association on Facebook, LinkedIn, and Twitter (@PABankers).