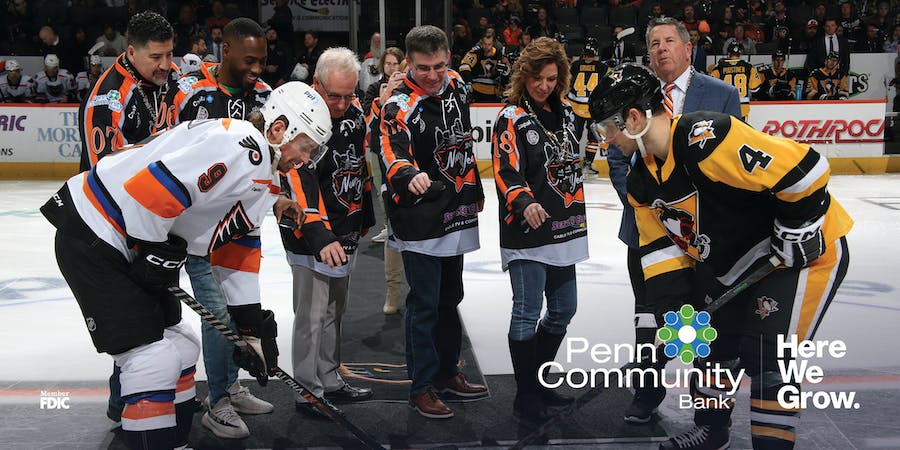 ALLENTOWN, Pa (January 2023) – Penn Community Bank, the largest mutual bank in eastern Pennsylvania, has teamed up with the Lehigh Valley Phantoms as part of a new corporate partnership.

As part of the multi-year agreement, Penn Community Bank will hold a prominent position with the franchise, featuring the naming rights of the PPL Center concourse and owner of an Executive Suite. Penn Community Bank celebrated the partnership by serving as the presenting sponsor of the Lehigh Valley Phantoms New Year’s Eve game, which led into Allentown’s New Year’s Eve Celebration, concluding with the World’s Largest Puck Drop at midnight.

“We are happy to have Penn Community Bank join our team and be a part of the great work we’re doing here in the Lehigh Valley,” said Dennis Begley, Vice President of Partnerships and Premium Seating with the Lehigh Valley Phantoms. “From an unparalleled gameday experience to impactful charitable partnerships, we look forward to a long relationship that benefits our franchise, the bank, and the community as a whole.”

“Penn Community Bank always wants to truly be a part of the communities we serve. Partnering with the Lehigh Valley Phantoms and being a part of the excitement in and around the PPL Center is a natural extension of that belief,” said Jeane M. Vidoni, Penn Community Bank President & CEO. “We’re excited for this relationship and introducing ourselves and Greater Good Banking to individuals, families, and businesses across the Lehigh Valley.

As a mutual bank which gives 5% of its net income back to the community through charitable giving, plans are also in the works for Penn Community Bank to support the mission of Phantoms Charities which focuses on improving the lives of children and adults in the Lehigh Valley and the surrounding communities, with a special emphasis on youth health, fitness, sports and education.

As part of Penn Community Bank’s organic growth strategy, the $2.6 billion institution announced earlier it was entering the Lehigh Valley market with new locations in Allentown and Bethlehem, as well as additional business banking and lending presence in the region.

About the Lehigh Valley Phantoms: The Lehigh Valley Phantoms are a professional ice hockey team based in Allentown, Pennsylvania. The team competes in the American Hockey League (AHL) and serves as the primary development team for the Philadelphia Flyers of the National Hockey League. The Phantoms have been instrumental in the revitalization of downtown Allentown. The Team has built up hockey in The Lehigh Valley while finding multiple ways of giving back to the surrounding communities through initiatives on both the team end and the franchise’s charitable arm, Phantoms Charities. Learn more at: www.phantomshockey.com